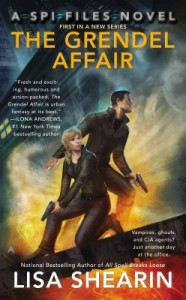 The first full length adventure of Makenna Fraser is sure to be one of the most enjoyable books of 2015. Shearin has made imminent death and destruction a whole lot of fun.

Mac is the seer for the New York office of Supernatural Protections & Investigations, a small town girl who moved to New York to become a journalist and is now wreaking her own brand of havoc on the supernatural community of New York.

Her boss is a dragon, the company lawyer is a vampire, her partner is a frighteningly competent human, and Mac, well Mac is armed with a paintball gun and her ability to see through any disguise or veil conjured by the paranormal. That's a good thing because on New Year's Eve someone is going to unleash two almost unstoppable, human-hating monsters on the revelers in Times Square. As New York prepares to toast the new year, Mac and the SPI are trying to keep New York from being toast in the new year.