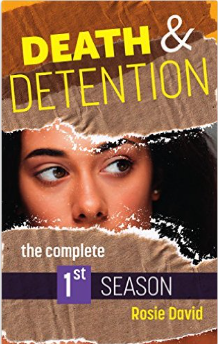 I am really enjoying this book. David is offering D&D in five episodes, the first being free. After reading it I bought the book.

In the affluent town of Augustine, being picture-perfect means everything. Which is why the powers that be are so willing to write off a troubled teen’s suspicious death as an accident.

But when seventeen-year-old outsider Prudence Mallory finds an anonymous letter that makes her classmate’s death look like a homicide, she can’t turn away from the mystery. -Amazon

Two sentences that do not do justice to Prudence. She is simply, for me, the best 17 yr old heroine I have read in a long time. Mind you, I am only at 44% but Prudence has not disappointed.

Prudence is no stranger to what happens when doing the right thing makes you the pariah, she’s done that and is still there. She knows that her digging into the “accidental” death of a classmate isn’t going to make her popular but she believes that justice for Anna is more important than being invited to the right parties- or any parties.

She can wield a mean can of coke, she has a bright pink scooter and a cell phone. She knows when a dumb idea is dumb but if that’s her only idea she’ll make it work out- somehow.

Oh, Prudence Mallory, I love you.